A Pain in the…

(Sorry, we couldn’t resist the obvious) 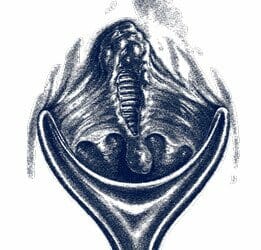 The fissure is located in the posterior midline in 90% of cases. The anterior midline is the second most common location. Laterally located fissures or the presence of multiple fissures should raise suspicions for possible HIV, Crohn’s disease, tuberculosis, or carcinoma.

Anorectal trauma secondary to passage of diarrhea or of a hard stool is the most common cause of an anal fissure. Patients often describe feeling severe pain with bowel movement as if they are “passing glass or razor blades.” The pain results from trauma to the numerous sensory nerves that surround the anus. Due to sphincter spasm, pain can linger for several hours ­­after a bowel movement and may feel like a deep-seated aching discomfort. Rectal bleeding can also present as spotting or as drops of blood in the toilet bowl, turning the water red. The bleeding may be intense, prompting an urgent phone call to the physician, or a visit to the emergency department.

Often, the tear is located in a fold of anoderm and cannot be visualized. Diagnosis and treatment is then based on the clinical history and symptoms. The patient is usually too uncomfortable for an internal examination, and digital exam with proctoscopy can be deferred until the fissure and spasm have resolved. However, coexisting pathology may be present and should not be forgotten or overlooked. 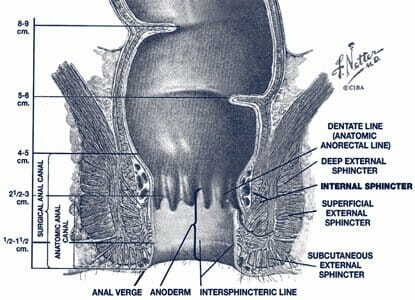 Botox® injection into the sphincter has also been used to relieve spasm. A total of 20 units is injected into the intersphincteric groove. The resulting paralysis of the internal sphincter may allow an increased vascular perfusion to the fissure and may facilitate healing. The healing effect lasts for up to six weeks, at which time, a repeat injection may be necessary. The most common side effect is mild incontinence to flatus, and is seen in six per cent of patients. It is a temporary problem, lasting only as long as the effect of the Botox®.

OPERATIVE RELIEF…WHEN ALL ELSE FAILS

Due to non-healing and the continuation of symptoms, it may become necessary to offer operative intervention. Most commonly, a patient will request an operation as the continued pain is too intense and debilitating.

It is important to rule out Crohn’s disease as the cause of the tear. Operative intervention in undiagnosed or untreated Crohn’s disease may lead to non-healing of the operative site and a worsening of the problem. Likewise, all possible infections should be diagnosed and treated prior to any operative manipulation.

When symptoms interfere with normal daily functioning, operative intervention in the form of a lateral internal sphincterotomy is offered to the patient. At this point, most patients desire to proceed.

The procedure is performed as an outpatient under intravenous and/or local anesthesia. The intersphincteric groove, between the external and internal anal sphincters is located by palpation (figure 2). A small incision is made over the groove and the leading edge of the internal sphincter is identified. An incision is made at the leading edge of the muscle and extended proximally for a length approximating the length of the fissure. The mucosa is then reapproximated and the patient is later discharged home. The operation is performed in the lateral location of the anus. Performing the procedure over the fissure itself, usually in the posterior location, is associated with a postoperative deformity known as a keyhole deformity, as the resulting permanent defect looks like a keyhole.

The procedure is safe and associated with a low rate of post operative incontinence; usually less than one per cent at five years postoperatively. Even at that, most patients surveyed reported that the degree of incontinence was minor and did not affect normal daily functioning.