“Squamous cell carcinoma of the anus is a curable disease when diagnosed and treated early in its course.”

Squamous cell carcinoma of the anus is the most well known member of an uncommon group of GI neoplasms. The incidence of this tumor has been increasing slowly, with 3,500 cases reported in the United States in 2001, and 5,260 cases reported in 2009. 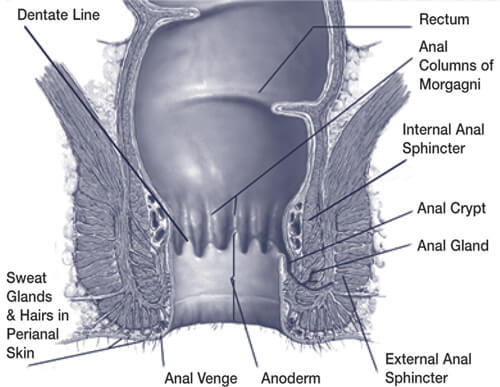 Treatment is influenced by the size of the tumor, the depth of invasion, and by nodal involvement. Generally, the area above the dentate line has a lymphatic basin which drains into the superior rectal lymphatics and then to the inferior mesenteric nodes. Additionally, lateral drainage occurs through the middle and inferior lymphatics and the ischioanal fossa into the internal iliac nodes. Distal to the dentate line, drainage is primarily to the inguinal nodes. Knowledge of the lymphatic drainage is important in guiding therapy of anal cancers to ensure that the nodal basins are included in the treatment. The TNM system used in the staging of squamous cell cancer of the anus places primary importance on tumor size, with T1 tumors measuring less than 2cm in diameter, T2 tumors measuring 2 to 5 cm in diameter, T3 tumors measuring greater than 5 cm in diameter and T4 tumors of any size demonstrating invasion of adjacent structures. Survival statistics and local control are inversely related to tumor size. In patients with synchronous or metachronous nodal involvement, or, in those with distant metastases, five year survival rates diminish dramatically.

A confirmatory biopsy performed through an anosocpe or proctoscope is diagnostic. However, an open surgical biopsy may be preferable both for enhanced visualization and patient comfort. The tumor location relative to the dentate line is noted. An endorectal ultrasound may be helpful in evaluating possible nodal disease. CT scanning will also be useful when evaluating the inguinal regions or the pelvis. Definitive biopsy should be performed on suspicious inguinal disease to differentiate nodal carcinoma which needs treatment, from reactive hyperplasia.

As many as 20% of patients have nodal involvement at the time of diagnosis and up to 25% may develop disease at a later time. Lymphatic spread seems to correlate with the size of the tumor, the depth of invasion and the histologic grade of the tumor. In tumors less than 2 cm in size, nodal spread is rare when compared to those malignancies larger than 2 cm, in which spread may be encountered in up to 35% of cases. With smooth muscle involvement, affected nodes may be found in 30% of patients and in 60% in those with tumor spread beyond the external sphincter.

This Disease is Curable

Formerly, surgical excision was the mainstay of treatment for all lesions, with wide local excision (WLE) used for smaller, more superficial lesions, and abdominoperineal resection (APR) used for larger, invasive lesions. Through experience, it has been found that WLE is associated with a high recurrence rate unless reserved for carcinoma in situ or T1 lesions. There must be a 1 cm margin of normal tissue at the excision site and the sphincters must be spared. Superficial tumors treated in this fashion have a 5-year survival rate approaching 100%. In properly selected cases, morbidity is minimal. However, for larger, T2, T3 or T4 lesions, WLE and APR have local recurrence rates as high as 60%, with survival rates decreasing dramatically. Distant metastases are common.

Searching for methods to improve the treatment and survival following an abdominoperineal resection, Norman Nigro, in 1974, began giving preoperative radiation therapy to the tumor, pelvis and inguinal nodes over 15 days, combined with 5-FU and Mitomycin C. He found that there was a complete absence of tumor in many of the surgically resected specimens. Further study led to the present practice of treating all but the most superficial and non-invasive lesions with chemoradiation alone. An Abdominoperineal resection, with a possible radiation boost, is reserved for patients with residual or recurrent disease after the initial chemoradiation.

With chemoradiation, complete responses occur in up to 87% of cases, local control in up to 86%, with five-year survival rates between 66 and 92%. In T1 and T2 disease, complete response rates are as high as 90%. Tumors larger than 5cm (T3 and T4) are more problematic, with 50% requiring a salvage APR. However, if patients with these larger tumors are disease free at the conclusion of chemoradiation, only 25% will require a salvage APR.

With radiation doses greater than 40 Gy, the complication rate increases. Complications may be systemic, such as dermatitis, mucositis, diarrhea and incontinence, fatigue or bone marrow depression. Death is rare. Local complications include cystitis, small bowel obstruction and arterial stenosis. Anorectal function is commonly preserved in up to 90% of patients, but there may be associated anorectal irritability with tenesmus, proctitis, diarrhea, bleeding, urgency or incontinence. Most of these can be controlled with medication, but a proximal ostomy may become necessary. Far from causing further

disability, an ostomy may be a welcome relief from symptoms caused by disease treatment.

Squamous cell carcinoma of the anus is a curable disease when ­diagnosed and treated early in its course.