With many hemangiomas and vascular malformations present at birth and often misdiagnosed, age of establishing a definitive diagnosis has ranged from 2 months to 79 years2,7,8. As a generalization, hemangiomas/malformations present young, with a male:female ratio of 1:2.52, though colonic hemangiomas/malformations approach an equal male:female ratio. The largest operative single institution series to date (n=10) looking at a sub classification of vascular malformations known as Blue Rubber Bleb Nevus Syndrome, had their mean age of patient 16 years old and a range of 2-36 years old9. Initial bleeding symptoms were present early (mean age 5 years).

The term “hemangioma” is often misused, and this is further complicated by the confusing nomenclature10. Adjectives and modifiers such as “strawberry-“, “cavernous-“, and “capillary” are added to the term “hemangioma”, but in the strictest sense are not hemangiomas11.

Vascular malformations result from an embryologic error in morphogenesis14. Mature endothelial channels lack smooth muscle, allowing expansion over time from hydrostatic means, and not proliferative expansion as hemangiomas do. A classification system of intestinal malformations had been created based on the histological abnormality (Table 2).

The capillary subtype of malformations is located in the perianal skin, small bowel, and appendix20. Usually singular, they lack a true capsule and are well circumscribed. ½ can have associated mucosal ulceration, with accompanied edema and inflammation. The histological hallmark is that they are a proliferation of capillaries with thin-walled spaces lined by endothelial cells.

The gross appearance of GI vascular malformations overwhelmingly present as intraluminal lesions, though it was mentioned that the diffuse cavernous malformations can have extension to adjacent structures by infiltrating the submucosa and beyond. They can range from solitary lesions, to clusters.

Though GI vascular malformations can be isolated and separate entities, there are several associated syndromes with characteristic organ involvement. The presence of simultaneous vascular malformations in the skin, brain, spinal cord, along with other clinical traits such as limb and bone hypertrophy, varicose veins and arteriovenous fistulas have been documented (Table 3)8,16,17,20,24. Despite cutaneous involvement being a frequent association, only 1.8% of cutaneous hemangiomas and vascular malformations have GI vascular malformations present25. Research in analyzing mono- and dyzygotic twins found no evidence of predisposing inherited patterns26. This is however countered by a description of 6 families that demonstrated an autosomal dominant morphology with incomplete penetrance27.

In the original classification by Mulliken and Glowacki, the key differentiation between hemangiomas and vascular malformations was due to the smooth muscle proliferation12,13. The abnormality arises in the embryological mesoderm, related to a defect intrinsic to the endothelial cells and the secretion of growth factors. Hormonal influence is also believed to play a part in their development as evidenced by the 3:1 F:M ratio2. The developmental stage of when the angiogenic abnormality occurs accounts for the different histological subtypes, with capillary hemangiomas developing from an earlier defect than cavernous hemangiomas in the stem cell cycle2,8,16.

A sequestration of platelet and clotting factors occurs due to the alteration of blood flow and from the abnormal endothelium, initiating coagulation29. Kasabach-Merritt syndrome can develop in rapidly expanding hemangiomas, where a DIC like picture can develop with consumption of fibrinogen and factors V and VIII, uncontrolled bleeding and a 35% mortality rate30. The constant sequestration of flow can lead to calcification and phebolith development in 50% of cases31. Anemia can also develop due to the erosion of the malformation into the bowel lumen and subsequent bleeding, but also due to fragmentation of reticulocytes by the thrombus. The sequestration and coagulation can also lead to local or segmental bowel ischemia16.

Several reports describe hemangiomas invading to surrounding structures, especially when the abnormality is in the rectosigmoid region with cases found involving sacrum, bladder and uterus. Despite the ability for local invasion, malignancy is rarely encountered8,32,33.

Misdiagnosis is the theme with hemangiomas and malformations. 80% of patients had undergone one prior inappropriate surgical procedure34-36. In a series with 5 patients, 4 had undergone a hemorrhoidectomy37. A series evaluating rectosigmoid cavernous hemangiomas had misdiagnosed the GI bleeding as hemorrhoids and ulcerative colitis34-35. Another series of 47 patients had estimated a delay in diagnosis of 16 years38. Another review came to similar conclusions where the correct diagnosis was made at 19 years with 51% of patients undergoing an inappropriate and ineffective operation36.

An estimated 80% of patients exhibit symptoms, with intraluminal bleeding in the majority of cases39-41. Up to 90% have painless bleeding that is recurrent. Half will have chronic iron deficient anemia. The first presentation is often in childhood with bleeding episodes worsening with time6. Though the majority of cases bleed into the lumen, there is potential for intraperitoneal or retroperitoneal bleeding when transmural malformations exist. Other non-GI malformations have also presented with hemothorax or hemopericardium. Mucosal trauma causes erosion and eventually bleeding, with increased bleeding usually occurring in larger and distal subtypes.

Obstruction is also possible, though infrequent42. These are possible when polypoid lesions act as a lead point for intussusception, or in cases where there is luminal obstruction by circumferential masses43. Constipation is feasible when tenesmus is seen with larger malformations. Abdominal or pelvic pain can be a common symptom.

There are usually few exam findings encountered with hemangiomas and malformations. Distal lesions can be detected on digital examination, though these masses are not usually overt. The physical characteristics of these tumors are soft and compressible with a nodular sensation. A mass on abdominal examination can sometime be palpated when large. One should be reminded of the associated syndromes with cutaneous manifestations20.

Evidence of chronic or acute blood loss will be present. In large consumptive masses, a decrease in clotting factors such as fibrinogen, platelets, and factors V and VIII is seen.

As described in the pathophysiology, the sequestration can lead to calcified phleboliths that are evident in 50% of cases31. This largely underestimates the presence of hemangiomas and malformations, due to the calcifications occurring in the colonic wall, and not extending to the soft tissue. The presence of these phleboliths, especially when lateral and outside the pelvic venous plexus are specific signs (Figure 2)33. While rare in the normal population, occurring in less than 5% of individuals under 30, phleboliths appearing in younger patients should raise suspicion to the diagnosis of malformations6,33,44. 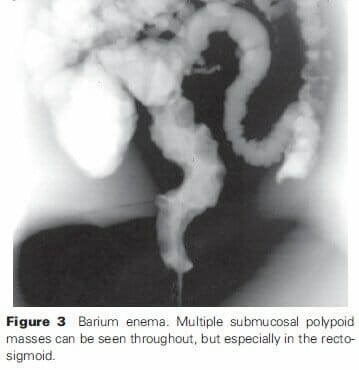 The primary manifestation of hemangiomas and malformations that are identified with contrast studies occur in obstructing or polypoid lesions (Figure 3)33. Anterior displacement of the rectum and widening of the presacral space can infer the mass effect and soft-tissue component of large cavernous rectal malformations. These masses may collapse with air insufflation. 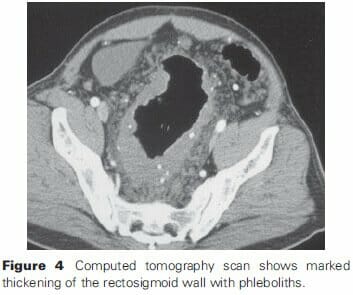 Pathognomonic findings consist of transmural enhancing bowel-wall thickening with our without phleboliths (Figure 4)33. The extent of extramural extension and surrounding invasion can also be accurately evaluated. One case review had utilized CT colonography and advocated that it aided in the diagnostic yield by helping identify mucosal lesions and intraluminal characteristics, as well as distribution33. 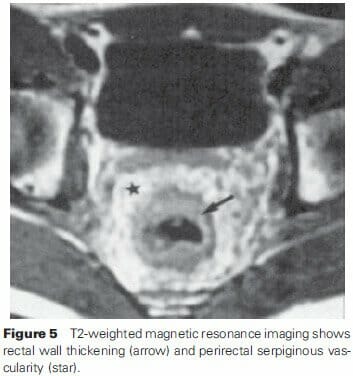 MRI can also enhance the diagnosis, especially in situations of rectal malformations8. In addition to the thickening seen, a high T2 signal intensity can be seen, thought to be due to the slow flow. Increased signal intensity is also noted in the perirectal fat with serpiginous structures correlating to the small vessels supplying the hemangioma (Figure 5). These MR features are not found in other clinical entities, and thus a higher specificity, especially over CT can help in diagnosis. Though hemorrhoids can present with similar T2 findings, the difference in the two entities can be seen by location and lack of perirectal fat extension or abnormalities in hemorrhoids. Phleboliths and calcifications are less easily detected on MR vs. CT or plain film.

One instance of massive hemorrhage in pregnancy was diagnosed with the use of endorectal ultrasound (Figure 6). The diagnosis was aided by the utilization of Doppler studies demonstrating pulsitile flow45.

Mesenteric angiography has a characteristic pooling, most often seen in the rectosigmoid. This can be identified in the absence of active bleeding, and it is helpful for identifying synchronous lesions6,7. A delayed venous phase is also a commonly seen pattern. However, the presence of thrombosis can lower the sensitivity of angiography as a diagnostic modality, as lesions can have a hypovascular or avascular appearance.

Colonoscopy is crucial in the evaluation and workup of hemangiomas and malformations40,46. As noted with air-contrast barium enemas, the polypoid lesions can collapse with insufflation. The intraluminal characteristics have submucosal projections that range from blue to red (Figure 7). Pinpoint areas of bleeding are possible, with the presence of overt ulceration rarely seen. Mucosal edema, nodularity, and vascular congestion are present, and thus can be mistaken for the incorrect diagnosis of inflammatory bowel disease2,17,31. Hemorrhoids are also a frequent misdiagnosis.

Evaluation of the upper GI to aid in the identification of synchronous lesions is suggested, as well as a complete colonoscopy to assess the proximal extension. Consensus for biopsy is opposed6,17,18,31,44,47, due to the obvious potential for bleeding, though some have suggested its use when obtained with caution to enhance the correct diagnosis48.

As with all GI bleeding, critical care and resuscitative principles take first priority, insuring that hemodynamic stability is achieved.

In true histological hemangiomas, the plastics/reconstructive literature has acheived success with corticosteroids49-51. However, being stated that most of the GI associated hemangiomas are actually vascular malformations, pharmacological options are not effective. 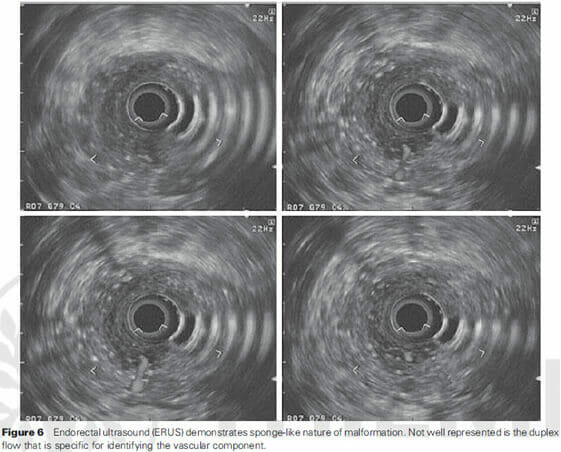 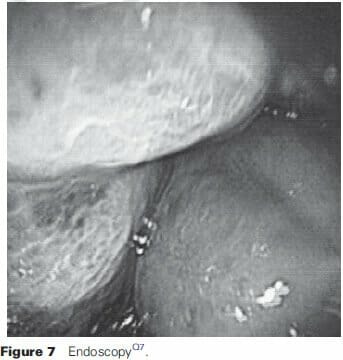 Ideal lesions of polypoid tumors with a narrow base have been successfully treated with snare polypectomy and cauterization52-54. Argon beam has also been reported to have success, even in instances of severe hematochezia55. A moderate rectosigmoid malformation was successfully treated endoscopically with injections of n-butyl-2-cyanoacrylate, but over a course of 13 sessions56. The same authors report a case of similar lesion on a different patient whom required 15 sessions, though this patient died 4 months for recurrent bleeding after treatment was completed. This technique should only be used if surgery is not a feasible option.

Despite more conservative options, the treatment of choice is surgical resection. In regards to rectosigmoid malformations, prior to 19716,16,17,57-59, the recommended treatment was abdominal-perineal resection. Since, sphincter preservation is the goal, low anterior resection to with mucosal resection is the current standard60. Other surgical options include segmental resection, a low anterior resection without a mucosectomy, or the modified Parks coloanal pull-through61,62. Technically, the proximal margin is well delineated by the presence of subserosal serpentine vessels in the colon with the malformation, as well as a more rigid bowel and thickened mesentery63. If normal distal bowel exists, a double-stapling approach is feasible. In regards to the mucosectomy, a plane exists between the muscularis and the mucosa, allowing a sleeve to be resected64. A removal of the mucosa 0.5cm proximal to the dentate line is made, with the aid of a submucosal epinephrine infiltration. Some approaches advocate a dissection down to the levators, and the preservation of a 3-4cm anal/distal cuff, and a hand-sewn anastomosis47. As with most anal anastomosis a proximal diverting ileostomy is created.

In more proximal lesions, segmental resection, as well as full-thickness wedge resection, suture ligation and operative polypectomy is advocated9. The largest single institution analyzing blue-rubber bleb malformations had advocated an aggressive surgical approach, and eradication of all identified lesions. This is combined with interoperative push-enteroscopy to aid in a thorough evaluation of all malformations. This series had analyzed 10 patients, and only had rebleeding in one instance, however that patient had over 557 lesions. Their experience advocates for complete resection, as lesions that were incomplete by banding or suture ligation techniques have expansion of residual malformations (rather than recurrence).

If fortunate to have an isolated proximal malformation, laparoscopic approaches have been successful65.

If you experience sharp pain in the lower abdomen along with fever, nausea, and vomiting, the two most common culprits for your condition would be appendicitis or...
VIEW MORE>

If you experience sharp pain in the lower abdomen along with fever, nausea, and vomiting, the two most common culprits for your condition would be appendicitis or...
VIEW MORE>