For those with a short attention span and a desire for immediate answers, here is the conclusion of this article: CONCLUSION – Save your time and money. Don’t bother trying to clean or cleanse your colon. Your colon does not require any user intervention.

Proponents of colon cleansing claim that cleansing is necessary to maintain a healthy colon, lose weight, prevent colon cancer, and clear the body of toxins or parasites. Ads for colon cleansing supplements warn that mankind is living with an average of 20 pounds of undigested, impacted, rotting colonic fecal matter stuck to the colonic wall. Furthermore, this “spackle” has been stagnating for years, creating an ideal environment for parasites and interfering with the absorption of nutrients. As reported in USA Today on January 11, 1999, “Most people who eat the standard American ‘goo and glue’ diet have about 5-10 pounds of matter stored in the colon. It’s said that, according to the autopsy, John Wayne had 40 pounds of impacted fecal matter in his body at death. Elvis reportedly had 60 pounds.” None of this reportage was ever confirmed.

The result of this supposed build-up of poisonous fecal waste is that the toxic matter becomes absorbed through the colon wall and into the circulation, leading to a new syndrome called autointoxication. Autointoxication then causes lethargy, headaches, decreased sexual drive, acne, and body odor.

The jump to therapeutic colon cleaning seems easy and logical. Who wouldn’t want to have a better memory, clearer vision, immunity to disease, clearer skin, and a better sex life? A clean colon must lead to a clean body and an even cleaner mind. Buy the product and reap the benefits.

Practiced for both religious and health reasons in Egypt since 1500 B.C. and recorded in the Eber Papyrus, hollow reeds were inserted into the rectum while bathing in the Nile, to induce water flow into the rectum. Did the Schistosomiasis trematodes get a free ride through the reed into the rectum as well? The Greeks used cleansing to enhance fitness and strength. Colonic irrigation was widely used in hospitals and doctors’ offices until the 1920’s, when it began to fall out of favor due to questions regarding its necessity and efficacy. Recently, colon cleansing has staged somewhat of a comeback due to aggressive marketing via infomercials and the internet. If it is on television or the internet, it must be true. OMG! LOL! 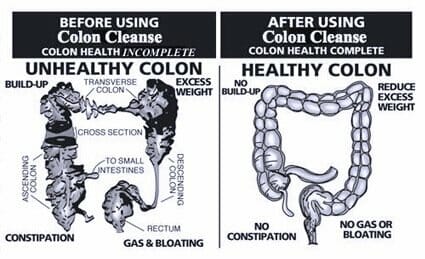 Methods used to irrigate the colon involve colonic hydrotherapy (enemas or “high colonics”), dietary changes, and oral purgatives. According to the advertisements, there are many substances used to remove stubborn colonic wall plaque and sludge. Activated charcoal, cascara, fennel seed, turmeric, betaine HCL, magnesium oxide or green-black walnut hull are just a few of the many products used. The process may require several weeks to one year to dislodge the mucoid plaque.

During colonic irrigation, a colon hydrotherapist inserts a tube into the rectum and instills up to 20 gallons of water. Supplements such as coffee, probiotics, enzymes, even oils may be added to the irrigation fluid. The abdomen is massaged and the colon contents are evacuated through the tube. Some techniques approach downright quackery. Psyllium may be added to the hydrotherapy fluid. When the fluid is evacuated the solid mass of psyllium may indeed look like sludge or a cast of the colon, encouraging the now cleansed, horrified and relieved victim to plunk down more cash for future relief.

Despite all of the hype and claims, there is no scientific evidence to support any of these practices. Normally, the mucosal lining of the colon constantly regenerates, sloughing old cells along with any associated particulate matter. Numerous glands secrete mucus, making it difficult for anything to truly adhere to the walls of the colon. The symptoms of lethargy, low appetite, weight gain, headache, and irritability are not caused by autointoxication of rotting food stuck to the colon. Many of these symptoms are explained by the normal mechanical distention of the bowel, activating the body’s autonomic nervous system. There is abundant evidence that the colon walls are superbly resistant to the movements of bacteria, viruses and toxins through the colon. Translocated bacteria and viruses are rapidly cleared by the B-cell and T-cell systems in the bloodstream and lymphatics. There is no objective evidence that cleansing the colon can relieve the vague symptoms described by colonic cleansing device manufacturers.

There are risks associated with colon cleansing. Mechanical colonic irrigation tubes can perforate the rectum and the large volume of cleansing fluid may cause electrolyte imbalances and cardiac arrest. Unclean equipment used to irrigate the colon may lead to infections. Oral colon cathartics lead to psychological or physiological dependence and may interfere with the absorption of certain prescription medications.

Save your time and money. Your colon will take care of itself. No user intervention is required.