Different, Dangerous and Difficult to Detect.

What is it and how do we find it?

“Flat colonic polyps represent a double threat. They are easy to miss during colonoscopy… and they seem to have a higher incidence of associated malignancy.” 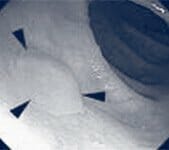 It is now accepted that most colon cancers originate from benign colon polyps. The cancer-to-polyp sequence is the driving force behind colon screening to find and remove polyps before they transform into a malignancy. There is a unified set of screening guidelines that address the age of first screening, the frequency of screening and the method of screening. This screening has been effective in achieving the stated goal of reducing the number of new colon malignancies detected per year.

Traditionally, colon polyps have been classified based on their gross appearance as being either sessile polyps or pedunculated polyps. Sessile polyps are broad-based growths abutting the mucosal surface of the colon. Pedunculated polyps have a stalk which is attached to the colonic surface on one end and to the base of the polyp on the other end.

Polyps have been classified based on their microscopic appearance as well. Both sessile polyps and pedunculated polyps have been observed to be either hyperplastic or adenomatous. Microscopically, in hyperplastic polyps, the lining epithelium loses its regular columnar and goblet cell pattern and appears serrated because of flattening of the cells. Adenomatous polyps consist of closely packed epithelial tubules separated by normal lamina propia. These can undergo malignant transformation. Complete removal prior to any mitotic change is thought to prevent the development of colon cancer.

The Flat Polyp… Why is it Different?

For many years surgeons have known about the existence of polyps that are more
difficult to visualize during colon screening. These polyps are flat and seem to easily blend in with the normal colonic architecture. They are not significantly raised from the surrounding mucosa and are therefore more difficult to find during optical colonoscopy, barium enema or virtual colonoscopy (figure 1).

Were it not for the now recognized increased malignant potential of flat polyps, they would not represent much of a threat. However, flat polyps seem to have a higher degree of associated malignancy when compared with hyperplastic or adenomatous polyps, making them more dangerous, as they are easier to miss during the screening process.

The Flat Polyp… Why is it Dangerous? 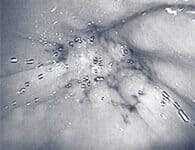 In addition to polyp size, the only other statistically significant harbinger of an underlying malignancy is a central depression in the polyp (figure 2).

A recent study highlighted the worrisome nature of these lesions(1). One thousand eight hundred males were screened at a California Veteran’s Administration hospital between 2003 and 2004. Two thirds of these patients were symptomatic, and the remainder were seen for routine screening or surveillance. Traditional polypoid neoplasms were found in 37% of patients, while flat polyps (or “nonpolypoid colorectal neoplasms”) were found in slightly less than 10% of the group.

Of note and caution, when compared with the rate of malignancy in polypoid lesions, the flat growths were more likely to contain in situ or invasive carcinoma, irrespective of polyp size. The flat growths containing a cancer were also smaller in size than the traditional, raised polyps that harbored a malignancy. This report concluded that the depressed type of flat growth had the highest risk for harboring a malignancy, at 33%. 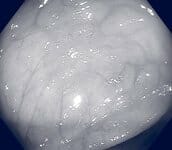 Various techniques have been used in identifying flat polyps. Interestingly, as the colonoscope is passed over the polyp several times during a closer examination of the mucosa, the polyp seems to swell and become more friable. Special attention should be paid to this phenomenon and numerous biopsies should be taken if the area in question cannot be completely removed. Additionally, the area should be injected with black
ink to more easily enable future identification during re-evaluation or laparoscopic resection. 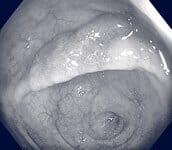 Narrow band imaging is an optical filter technology that radically improves the visibility of capillaries, veins and other subtle tissue structures, by optimizing the absorbance and scattering characteristics of light. Narrow band imaging works by changing the white light emitted by the endoscope to a bluish light, which has a narrower wavelength. The blue light gives a greater visual contrast to the surface structure of the colonic mucosa. It enhances vasculature within and beneath the mucosa. Using color differentiation, the normal colonic mucosa appears green, while polypoid tissue is brown (Figure 4).

In a recent prospective study,(2) endoscopists evaluated the colon from the anorectum to the region located 30 cm proximal to the anus. Initially white light colonoscopy was used to evaluate 188 subjects. Following this evaluation, the same mucosal area was re-evaluated using narrow band imaging. The results were enlightening.

The flat polyp… A Double Threat

Flat colonic polyps represent a double threat. They are easy to miss during colonoscopy, barium enema or virtual colonoscopic examination of the colon, and they seem to have a higher incidence of associated malignancy. While not as common as sessile or hyperplastic polyps, flat polyps may be associated with a higher morbidity or mortality if undiscovered or if left untreated. When finally found, they may present at a later stage of malignant disease. Malignant transformation and growth of flat polyps might account for the finding of a colon cancer in patients who had had a normal colonoscopy in the recent past. The flat polyp may not have been observed during the initial exam.

Even experienced endoscopists may fail to diagnose flat polyps. Newer techniques may aid in their discovery. More research is needed into finding more reliable methods of early detection. Vigilance is required during each colon exam.