An alphabet of diseases – some bothersome and some ominous

“Prevention of disease transmission is the goal in any illness… Many people have a genital HPV infection without exhibiting any signs
or symptoms.” 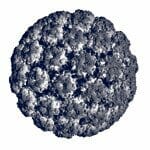 One third of all cases of newly diagnosed sexually transmitted infections are related to HPV. Five million new cases of HPV are diagnosed each year, and at any given time in the United States, twenty million men and women have an active infection. Many patients will progress to the development of anal condyloma acuminata (genital warts). In addition, HPV is strongly associated with the development of squamous cell carcinoma of the anus. Hence, this ubiquitous virus has taken on a more menacing significance. It is no longer considered to be simply an inconvenient sexually transmitted disease. Many people have a genital HPV infection without exhibiting any signs or symptoms. Even when asymptomatic, the disease can be transmitted and complications of the infection may become manifest.

If squamous cell carcinoma of the anus is diagnosed, the standard treatment of intravenous 5-FU, mitomycin-C and radiation is used. Five-year cure rates approach 84%. Follow up biopsies may be used to examine the treated area. In patients experiencing an incomplete response, or in those patients exhibiting a recurrence of the disease, an abdominoperineal resection may be used as a salvage technique.

Condyloma Acuminata, A Major Nuisance
The most common clinical manifestation of HPV is that of genital warts. Sometimes called condyloma acuminata or venereal warts, these lesions are the most easily recognized sign of a genital HPV infection. Human papillomavirus serotypes 6, and 11 comprise the major cause of cutaneous papillomas in the general population.

Genital warts are soft, moist, flesh colored and appear in the genital area within weeks or months after infection. They sometimes appear in clusters that resemble cauliflower-like bumps, and are raised or flat. In women, genital warts may present on the vulva or cervix, and inside the vagina or anus.

In men, genital warts may appear on the scrotum, penis or in and around the anus. There are cases where genital warts have been found on the thigh and groin.

While chemical methods may be curative, treatment may ultimately require some form of physical removal or destruction. This can be accomplished through freezing, electrodessication (cautery) or laser ablation. Surgical excision offers the most thorough and complete means of eradication. Subdermal injection of Interferon, more commonly used in the past, may be used to augment the treatment. Even with the best of treatments, recurrence is common and long-term surveillance is necessary in order to spot recurrences as soon as they arise.

Prevention is the cure

Prevention of disease transmission is the goal in any illness. Latex condoms are helpful but not completely protective as lesions may arise in covered areas. Misuse or failure to cover all exposed areas can also lead to the spread of disease. Regular examinations of susceptible individuals may aid in the control of early disease. The larger the load of condyloma, the more difficult is the treatment. Cytological swabbing and testing with early diagnosis may one day enable the practitioner to treat HPV while it is in the microscopic stages. Further research is necessary to clarify this issue.
Prevention remains the best cure.