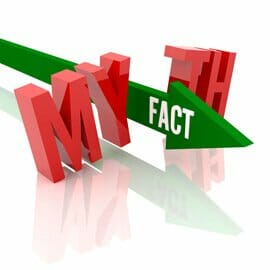 Though colon cancer causes the second most cancer-related deaths in the United States, many people harbor misconceptions about the dangerous disease. Because colon cancer is highly treatable if detected early, developing a better awareness of the condition can help you stay free of colon cancer in Los Angeles. This can start with learning the truths behind many common myths that circulate about colon cancer.

Here are a few of the most prevalent myths about colorectal cancer:

It only affects men.

Though incidence of colon cancer is higher in men, both genders are at equal risk of developing the disease. Statistics from 2007 (the most recent available) show that 72,755 men and 69,917 women were diagnosed with colon cancer.

While it’s true that people of any age can develop colon cancer, the disease is far more common in older individuals. Over 90 percent of colorectal cancers are diagnosed in those over the age of 50, which is why regular colonoscopies become so important at this age.

On the contrary, recovery from colon cancer is likely if testing finds the disease in its early stages. If treated before it has a chance to spread, colon cancer has a 90 percent five-year survival rate. However, because of lack of testing, only 40 percent of cases are diagnosed early.

Over 50 percent of those diagnosed with colorectal cancer don’t have any symptoms at all. Though colon cancer can produce a wide array of symptoms like cramping, rectal bleeding, unexpected weight loss and changes in bowel habits, these are typically indicative of the disease’s later stages. This is why it’s so important to get a colonoscopy even if you don’t have any symptoms that point to cancer.

Colon cancer surgery will be disfiguring and result in use of a colostomy bag.

Modern surgery is typically performed with minimally invasive laparoscopic techniques, which use a few minor incisions rather than one large wound. This drastically reduces scarring, pain and recovery time when compared to open surgery. Early screening and early diagnosis coupled with modern surgical techniques have also minimized the chance of needing a colostomy, which is a new outlet created for waste when the rectum must be removed. Though cancers within four inches of the anus once frequently required the use of colostomy, this is no longer necessary in 80 percent of cases.

Because it’s such a common cause of death in our society, you may have heard many things about colon cancer, but not all of them are rooted in fact. For more information on the prevention and treatment of colon cancer in Los Angeles, speak with your colorectal specialist.