Robotic Colorectal Surgery.  The Hospital.  The Surgeon.  The Patient. 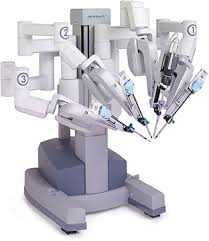 There are several conditions which require surgical intervention.  In the modern surgical era, there are several ways to accomplish the operation.  The procedure can be performed in a traditional, open fashion, or through a minimally invasive technique such as laparoscopic surgery, or robotic surgery, also known as robot-assisted surgery or robot surgery.  However, two things are constant; the need for a skilled surgeon and team, and the need for a hospital with a surgical robot.  Cedars-SinaiMedicalCenter is such a hospital.

The procedure itself is performed by a colon and rectal surgeon, also known as a proctologist.  The surgeon, and a trained assistant, guide the robot instruments through the operation.  The robot does not move on its own.  It is considered a “slave robot”.  The robot is made by Intuitive Surgical™ and is called the da Vinci Si®.

How Does It work?

In robotic surgery, after the ports are placed, the robot is brought next to the patient and “docked”.  In docking, the arms of the robot are mated (attached) to the ports.  The surgeon now sits at a console and guides the instruments from the console.  A first assistant remains at the patient’s side to assist with various parts of the operation such as changing instruments.

What Are The Advantages of Robotic Surgery?

Am  I A Candidate for Robotic Surgery?

There are 6 areas of abdominal surgery in which a robotic approach can be used.  They are:

The surgeons of Los Angeles Colon and Rectal Surgical Associates are trained and certified in the use of the robot in colorectal operations.  Your first step in learning whether you are a candidate is to schedule a consultation.  You can do this by calling (310)273-2310.  You will be examined and will be advised as to the possibility of your operation being performed using a surgical robot.  You will have a chance to ask questions and understand your treatment.