How a discovery and a father’s letter to his son opened the door to incisionless colorectal surgery.

Finishing a robotic colon resection recently, and admiring the 5mm incisions on the abdomen, the following question was raised: “What could be more elegant than this?” The answer followed immediately: “No surgery at all.”

Recently, discoveries which might lead to an incisionless cure were announced. Proteomics enabled researchers to isolate abnormal proteins associated with certain subtypes of colorectal cancer. Further understanding of and manipulation of these proteins might enable the intravenous therapeutic approach, and replace the scalpel in the curative treatment of colorectal cancer.

In order to adequately understand proteomics, one first must have a grasp of the structure and mechanics of DNA and DNA replication. DNA functioning can be difficult both to explain and understand. To build a foundation for the study of proteomics, there is no better way, no simpler way, to begin than by reading a sweet letter written in 1953 by Francis Crick to his 12 year old son Michael, whereby the father explained this immense discovery to his son. With an understanding of the DNA double helix, proteomics becomes easier to grasp (and will be explained in the next newsletter). The colorectal surgeon of the future will yield the knife and wield a modified protein instead. The scars will be non-existent. PROTEOMICS.

Jim Watson and I have probably made a most important discovery. We have built a model for the structure of des-oxy-nucleic-acid (read it carefully) called D.N.A. for short. You may remember that the genes of the chromosomes-which carry the hereditary factors-are made up of protein and D.N.A.


Our structure is very beautiful. D.N.A can be thought of roughly as a very long chain with flat bits sticking out. The flat bits are called the “bases”. The formula is rather like this: 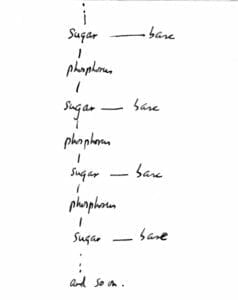 Now we have two of these chains winding round each other-each one is a helix-and the chain, made up of sugar and phosphorus, is on the outside, and the bases are all on the inside. I can’t draw it very well, but it looks like this: 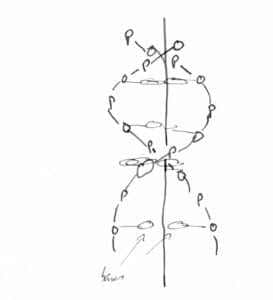 The model looks much nicer than this.

Now the exciting thing is that while there are 4 different bases, we find we can only put certain pairs of them together. The bases have names. They are Adenine, Guanine, Thymine& Cytosine. I will call them A, G, T and C. Now we find that the pairs we can make-which have one base from one chain joined to one base from another –are:

Now on one chain, as far as we can see, one can have the bases in any order, but if that order is fixed, then the order on the other chain is also fixed. 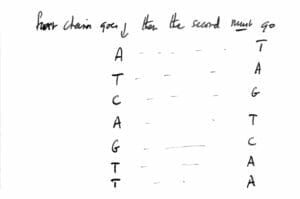 It is like a code. If you are given one set of letters, you can write down the others.

Now we believe that the DNA is a code. That is, the order of the bases (the letters) makes one gene different from another gene (just as one page of print is different from another). You can now see how nature makes copies of the genes. Because if the two chains unwind into two separate chains, and if each chain then makes another chain to come together on it, then because A always goes with T, and G with C, we still get two copies where we had one before. For example: 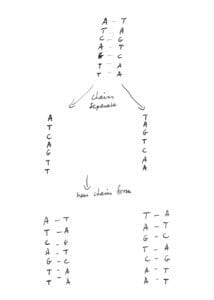 In other words we think we have found the basic copying mechanism by which life comes from life. The beauty of our model is that the shape of it is such that only these pairs can go together, though they could pair up in other ways if they were floating about freely. You can understand we are very excited. We have to have a letter off to Nature in a day or so.

Read this carefully so that you understand it. When you come home we will show you the model.

When abnormal proteins are made from mutated DNA, trouble may soon follow.