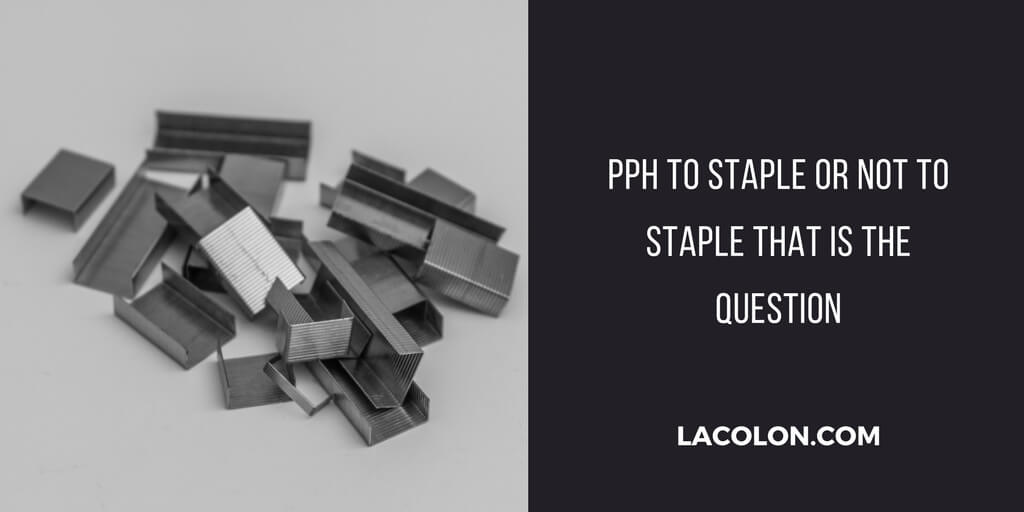 Symptomatic internal and external hemorrhoids present with some of the most vexing problems known to mankind and to surgeons. Each year, over 525,000 patients are treated for symptoms associated with hemorrhoids. (1) Of these, 10-20% ultimately require surgical treatment.

No definite etiology has been proven to be the primary cause of symptomatic hemorrhoids. However, factors which seem to be associated with hemorrhoidal disease include constipation, prolonged straining at defecation, diarrhea, pregnancy, heredity, aging, internal sphincter abnormalities, and gravity. All members of the adult population have experienced one or more of these etiological associations at sometime during life, making an exact etiology of hemorrhoidal disease difficult to prove.

Treatment options for symptomatic hemorrhoids are numerous and varied. They range from simple dietary modification with increased fiber intake and adequate fluid intake to surgical treatment. In between this range of options, patients may be treated with topical agents such as hydrocortisone creams, over-the-counter medicated preparations, sitz baths, leg elevation, and a variety of minimally invasive procedures.

Sclerotherapy (5% phenol in olive oil) has been a time-tested symptomatic remedy. Injections can be associated with immediate relief and are usually reserved for patients with minor bleeding, but may be used in patients who complain of mild fecal soiling or mucous discharge. Success rates vary, but sclerotherapy is most often only temporary.(2)

Infrared coagulation, laser therapy and cryotherapy have been used with greater and lesser degrees of success. These modalities depend upon the application of extremely high temperatures (or extremely cold temperatures) to the hemorrhoidal plexus in an effort to coagulate the blood supply and denature the protein in the hemorrhoidal plexus. Originally, it was thought that this would lead to obliteration of the hemorrhoids and the associated hemorrhoidal symptoms. However, these treatments have not been found to be associated with a high success rate.(3) Additionally, if used incorrectly, the post-treatment pain associated with these modalities can be debilitating and prolonged.

Rubber band ligation has been used with varying degrees of success in an attempt to remove individual hemorrhoidal groups. With or without an anesthetic agent, rubber bands (either a single band or double bands) are placed around the base of each hemorrhoidal pedicle. This produces vascular necrosis of all of the tissue beyond the rubber band. This modality has also met with varying degrees of success. It has an associated failure rate of between 20-30%.(4) Bands have been known to slough off in the early post-treatment period resulting in an incomplete treatment. Advantages of the rubber band technique include its use as an outpatient treatment and its ease of use. Sepsis is a rare but life threatening complication.(5-7)

Because the procedure is performed proximal to the dentate line, in a region devoid of pain fibers, stapled hemorrhoidectomy is associated with significantly less postoperative discomfort, and a more rapid to return to the activities of daily living. Visceral sensory fibers are found in the surgical area however, and this can give rise to a temporary sense of fullness (urinary or rectal) and an associated feeling of needing to empty the bladder or to defecate in the immediate post operative period.

It is significant to note that since the procedure was first popularized in Europe (Italy), the adoption of the procedure as a standard technique in the treatment of hemorrhoidal disease has spread from east to west. Over the course of the last five years, 300,000 stapled hemorrhoidectomies have been performed world wide (personal communication from Ethicon Endo-Surgery).

Relative contraindications include patients in whom previous hemorrhoidal operations or other operative procedures have left the patient with decreased sphincter tone or muscular disruption. Additionally, patients who have been anticoagulated must be evaluated closely. Stapled hemorrhoidal operations should be considered like any other operative procedure in these individuals. Therefore, patient overall physical and medical status must be evaluated prior to embarking definitive therapy.

It should be noted that the stapled hemorrhoidectomy can be technically challenging. There are numerous steps in this procedure which must be followed in order to avoid postoperative complications. We have found that two trained surgeons performing the procedure together lessen the likelihood of a surgical misadventure. One surgeon should be a colon and rectal specialist (by formal training or through focused experience). Similar proposals have been advocated by other authors as well. 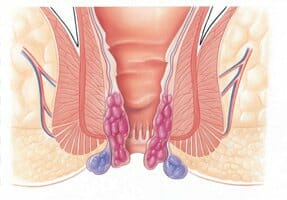 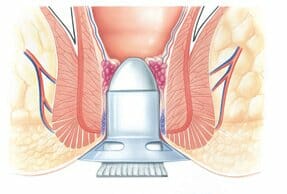 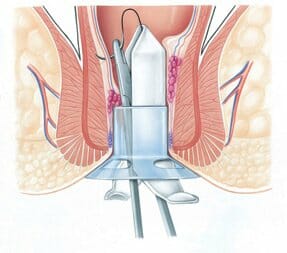 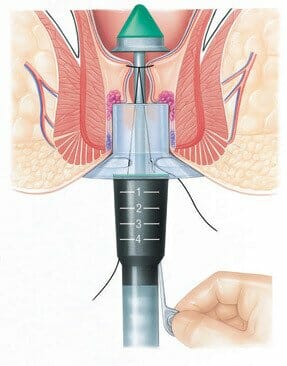 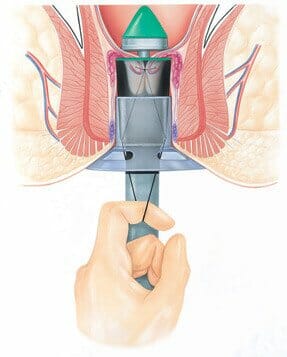 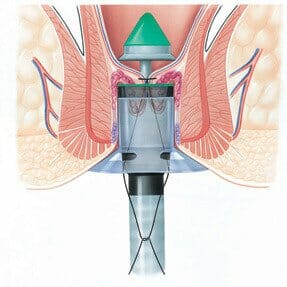 In female patients, a gloved finger is then placed into the vagina to ascertain that the vaginal lining is free from the jaws of the closed stapler. The closed stapler is moved laterally in both directions and then proximally and distally. This movement of the stapler will help the surgeon to ensure that the rectovaginal septum in not incorporated between the anvil and chamber of the stapler.

The stapler is fired and held closed for two or three minutes to aid in hemostasis. Finally, the stapler is opened, and removed and the staple line is visualized (figure 7). 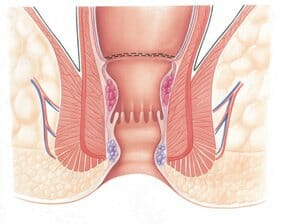 Hemostasis is evaluated by placing the purse string anoscope back into the anorectum, and evaluating the staple line for bleeding. Any venous oozing can be controlled using electrocautery, and any arterial bleeding can be controlled with a 2-0 or 3-0 absorbable suture ligature. The staple line must be evaluated for its complete circumferential placement. Any gaps in the staple line can be over-sewn with 2-0 absorbable suture (proximal to the level of the dentate line).

Once again, in female patients, a bimanual examination of the rectovaginal septum is performed. Both fingers are moved in opposite directions to ensure that the mucosa of the rectum and the vagina move separately from each other and that there is no rectovaginal fistula present.

The stapler is opened to its maximum extent and the hemorrhoidal doughnut is carefully retrieved from the chamber of the stapler. It is evaluated to be sure that it is completely circumferential. An incomplete doughnut should alert the surgeon to a possible skip area or problem with the staple line, and the operative site should be re-evaluated. The specimen is evaluated for height and thickness. It is then sent to the pathologist with a request that all microscopic layers be described in the final pathology report.

Although we do not use packing or topical hemostatic agents, many surgeons do. An hemostatic agent such as oxidized cellulose may be placed into the anorectum. A light dressing is placed externally. Unless contraindicated, each patient is given intravenous and/or intramuscular ketoralac at the conclusion of the procedure. The operation is then concluded.

In the recovery room, patients may complain of rectal or urinary pressure or pain. They may feel the need to urinate or defecate even though they had given themselves a preoperative enema and had emptied their bladder. Additionally, each patient received a local field block in the operating room. Early in our experience we learned that intravenous narcotics did little to alleviate these uncomfortable sensations. We discovered that midozolam, given in one or two milligram boluses on an as needed basis in the recovery room allowed our patients to rest and then recover without these problems. We administer the midozolam when the patient begins to complain of a painful pressure sensation.

Patients have been advised preoperatively, and are reminded in the postoperative period to avoid straining at bowel movement. This increased valsalva effect can lead to postoperative bleeding. Patients are told that they may feel rectal pressure and the sensation of a need to defecate. This sensation will resolve in 24 to 48 hours. A light sedative on the first postoperative night will allow for a smooth transition into the postoperative period. Patients are told that the staples will slough in four to six weeks, and are advised that no anorectal sexual manipulation can occur for at least six weeks.

Post-operatively, patients are given a prescription for a narcotic analgesic to take on an as needed basis. Most often, this is not necessary. Unless contraindicated, patients are also given a prescription for ketorolac, 10 mg by mouth every six hours, for three days. Patients are instructed to take this on a regular basis until the prescription is finished. We prescribe preoperative and postoperative antibiotics in selected patients (those with cardiac valvular disease or other cardiovascular indications). As we have not had any cases of systemic or local perioperative infections, we are using antibiotics selectively. In our early experience, we routinely prescribed oral stool softeners. However, we found that this practice seemed to be associated with postoperative stool frequency. We also found that since the first bowel movement after the procedure was not necessarily uncomfortable, there no longer seemed to be a need for a postoperative oral bulking agent and we have discontinued this practice.

Patients are interviewed by telephone on the evening of the procedure and on the morning after the procedure. They are then seen in an office setting at one week, three weeks, one month, three months, six months, and one year postoperatively, and then on a yearly basis.

In 2002, in order to evaluate the safety and efficacy of this technique in the private practice setting, we evaluated our first 50 patients.

First and foremost, we found the procedure to be safe and free from all but the mildest of complications.

Mean operating time was 32 minutes. It was our subjective opinion that we required approximately ten procedures before each surgeon felt comfortable performing the procedure.

On a visual analog scale ranging from 0 (no postoperative pain) to 10 (the most imaginable pain), our patients experienced an average pain score of 1.1 on postoperative day one. This decreased to 0.7 on day seven, and 0.2 on day 21. Subsequent to this, all scores have remained at zero.

Two patients experienced post operative bleeding. One patient resolved with bed rest, and the other patient required a return to the operating room with suture ligation of a small bleeding artery at the staple line.

All patients reported complete satisfaction with the results and postoperative course. There have been no recurrences of symptoms or of hemorrhoids.

Our results further support these findings. Early postoperative pain scores were minimal and rapidly approached zero. Furthermore, most of our patients were able to return to their usual activities with in a few days. There were minimal complications associated with the procedure and patients have been very satisfied with their results.

Stapled hemorrhoidectomy is a revolutionary advance in the treatment of a common but vexing problem. Worldwide, it continues to grow in popularity as the procedure of choice in the surgical treatment of hemorrhoids. In the United States, it is being used with increasing frequency.

To date, three hundred thousand stapled hemorrhoidectomies have been performed worldwide. Our evaluation, and multiple other studies have shown that stapled hemorrhoidectomy is safe and is associated with a minimum of postoperative discomfort. Multiple European prospective randomized studies have demonstrated the safety and efficacy of this procedure, and currently several prospective randomized studies are underway in the United States in order to further evaluate the short term and long term results of the procedure.

Stapled hemorrhoidectomy is safe to learn in the private practice setting. It must be learned under the guidance of a surgeon specifically trained in the surgical anatomy of the anorectum and in the use of the hemorrhoidal stapler. This is critical.

Close attention must be given to each step of the procedure. The learning curve appears to be approximately ten cases. Two trained surgeons (one of whom is a colorectal specialist) should be present at each procedure.

TO STAPLE OR NOT TO STAPLE?

Based on our experience and on the experience of others as referenced in the worldwide literature, we believe that in the hands of specifically trained and skilled surgeons, stapled hemorrhoidectomy should be considered to be the gold standard in the surgical treatment of hemorrhoidal disease.