Another of life’s little twists

Fortunately all forms of volvulus are rare in the United States. With attention to the history, physical and radiographic exams, a surgeon experienced in treatment of colonic volvulus is the best hope for an ill patient.

Adding to life’s twists and turns, is an entity known as colonic volvulus. The word volvulus is derived from the Latin term meaning torsion or twisting. Although the linguistic anatomy may be obscure, the intestinal anatomy is clear. The colon and its mesentery twist, leading to a closed loop colonic obstruction, a more proximal intestinal obstruction, and an abdominal crisis.

Colonic volvulus may involve the cecum and terminal ileum, the transverse colon, the splenic flexure or the sigmoid colon.

Colonic volvulus affects between three and seven million people per year worldwide. The most common type of volvulus is the sigmoid volvulus, followed by cecal volvulus, transverse colon volvulus and the very rare splenic flexure volvulus. Ileosigmoid knotting, whereby the small intestine wraps around a loop of colon, is also known as a compound volvulus, and is rare. 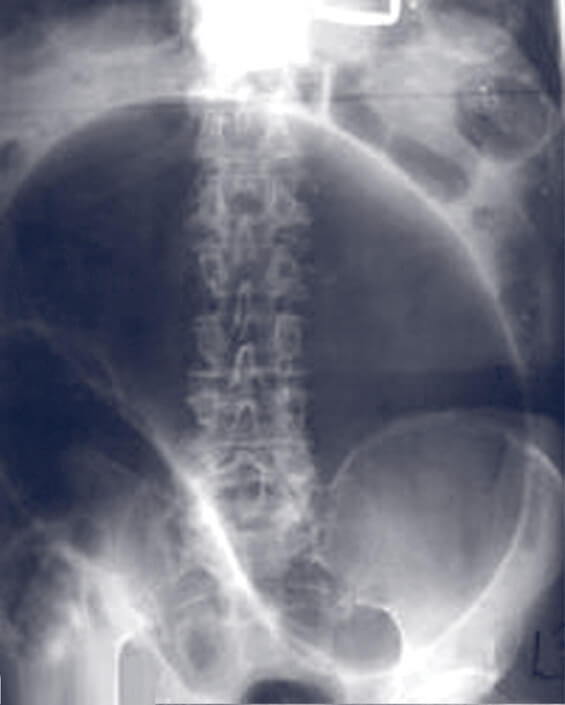 As the sigmoid colon is often redundant, with a long mesentery, it is not surprising that it can twist upon itself. The typical patient is older, male, institutionalized, on psychotropic medications and has had problems with chronic constipation.

Making a diagnosis of a volvulus may be delayed in the elderly as the lack of bowel movements is presumed to be due to ongoing constipation. Younger patients may present with the more classic signs of an abdominal crisis, including severe abdominal pain and a rigid abdomen. In both groups, the abdomen is distended with an empty rectal vault. As the mesentery twists, the sigmoid colon comes to rest in the right upper quadrant, and the abdominal plain film shows what looks like a “bent inner tube” (figure 1). This finding may be seen in up to seventy five percent of cases. A barium enema showing a “bird’s beak” at the point where the two ends of colon become twisted, confirms the diagnosis in almost one hundred percent of cases. A colonic neoplasm is more common and must be considered as an alternative diagnosis.

After making a diagnosis, the patient is hydrated, electrolyte abnormalities are corrected and endoscopic or rectal tube decompression is usually attempted. It is best if the colonic mucosa is visualized endoscopically prior to an attempted detorsion, so as not to inadvertently reduce an ischemic or gangrenous colon. Signs of sepsis or visual evidence of ischemia should alert the surgeon to the need for an emergent laparotomy. If decompression is successful, as evidenced by the rush of stool, liquid and flatus onto the shoes and clothing of the surgical intern who is commonly the first person to see the patient in the emergency room of a teaching hospital, the rectal tube is left in place. If possible, a mechanical bowel preparation is used to increase the possibility of performing a resection and primary anastomosis on a prepared colon. Cardiac, pulmonary and renal problems are corrected. The patient is then taken to the operating room as soon as possible. Without operative intervention, recurrences are common.

A sigmoid resection with a primary anastomosis is the most commonly performed procedure. However sigmoidopexy has been used, but is associated with an obviously higher recurrence rate. In extremely ill or moribund individuals, or in those whom continence may be an issue, a resection with an end stoma is often performed. If gangrenous bowel is encountered, removal of the twisted loop of sigmoid without attempting to untwist the colon should be performed. This will avoid the release of toxins and bacteria into the bloodstream, which might result in sepsis and cardiovascular demise.

The cecum and terminal ileum share a common mesentery which can twist in an axial direction, producing a volvulus and a more proximal small intestinal obstruction. Rarely, the base of the cecum may fold upon itself producing a cecal bascule. A constricting band is often seen across the ascending colon. The cecum and ascending colon must be mobile in order for a volvulus to form. Prior abdominal operations facilitate this cecal mobility, but a congenital lack of lateral fixation of the right colon is also an important contributing factor. Ten percent of patients are pregnant at the time of presentation.

The clinical presentation is that of an acute intestinal obstruction. Less commonly, as the cecum twists and then untwists, the presentation may be that of an intermittent obstruction. Abdominal pain and distention accompanied by nausea and vomiting may signal the onset of the volvulus. Undiagnosed, the entity may progress to a closed loop obstruction whereby the isolated loop of cecum may distend, occluding venous outflow and arterial inflow, leading to ischemia, necrosis and gangrene. In these cases, presentation is that of an acute surgical abdomen with signs of generalized sepsis. A small bowel obstruction will also occur in the ileum proximal to the closed loop volvulus.

Diagnosis may be confirmed if an abdominal plain film shows the classic “coffee bean” shaped colonic dilatation in the left upper quadrant (figure 2). A barium enema may be used in cases not resolved by plain films. A birds beak may be seen. However, the use of a barium enema is to be avoided if there is a concern about a colonic perforation, or if the abdominal exam points to the need for an immediate surgical procedure.

Although an endoscopic or percutaneous reduction may be attempted, these may be unsuccessful, risky and time consuming. A surgical resection and anastomosis is the commonest form of intervention. In the face of gangrene or ischemia, a resection is necessary. In unstable patients, a simple resection and ileostomy may be performed. In less urgent situations, some form of cecopexy may be performed rather than a resection. However, a cecopexy is associated with a high recurrence rate.

The mortality rate seems to be determined by whether a curative operation is performed on an elective or emergent basis, and is not based on the type of operation. With normal appearing bowel, the mortality rate averages ten percent. This increases to thirty five percent in cases of colonic gangrene.

Each of these conditions is extremely rare, difficult to diagnosis and treatment is often delayed as a result. Diagnostic acumen and surgical expertise are required to shepherd patients with these entities from diagnosis to treatment.

Fortunately all forms of volvulus are rare in the United States. With attention to the history, physical and radiographic exams, a surgeon experienced in treatment of colonic volvulus is the best hope for an ill patient.