GET UP TO SPEED PLEASE.

Rectal cancer is lethal. It is projected that there will be more than 50,000 rectal cancer related deaths in 2017. Staging the disease is all-important in treating the disease. Different stages, different treatments. Why should you care? If you are a physician, the answer is obvious. If you are a patient, the life that you save may be your own. The current staging of rectal cancer is straightforward. However, many physicians, and surprisingly, many surgeons, are not up to speed on staging, or which treatment steps follow which stage of each rectal cancer. And, since correct staging determines the treatment of rectal cancer, there are real consequences to incorrect staging, and incorrect treatment.

That is why you should care.

You can leave the staging to others; in which case, you needn’t read further. Or, you can continue reading, spend a moment understanding the staging, and become an “up to speed” treatment advocate, and possibly, a rectal cancer survivor.

A ROSE BY ANY OTHER NAME IS NOT A ROSE.

First, it must be understood that the rectum is not the colon. Similar but different. The rectum is the distal portion of the GI tract, and is between 15 to 20 cm in length. The rectum functions differently than the colon. Importantly, since the rectum is infra-peritoneal and relatively isolated from the more proximal colon and small intestine, it can be treated with therapeutic radiation without the fear of causing more proximal small bowel radiation enteritis. Radiation enteritis can be crippling. Radiation therapy is extremely important in the treatment of rectal cancers.

As with many cancers, survival is mostly predicated on Tumor thickness, Nodal disease and Metastatic disease. TNM. That’s it. Of course, other tumor biologic characteristics can influence survival. However, TNM is at the heart of staging and treatment. For completeness sake, the other influential tumor characteristics are the tumor histology; whether it is well differentiated or anaplastic, mucin producing, is associated with lymphovascular or perineural invasion, or is associated with certain genetic mutations. Once the tumor has been described using the TNM system, all of the values are grouped into one of four stages, and it is these stages that guide treatment.

Tumor thickness relates to the various layers of the rectum. The most inner layer is the rectal lining, or mucosa. Next to the mucosa is a thin muscular layer termed the muscularis mucosa. Continuing, the next layer is the submucosa, followed by the thick muscularis propria and then the outer lining called the serosa, which is a layer of connective tissue. Technically, the rectum does not have a formal serosa, but there is some connective tissue around it. What follows is a slightly simplified version of the staging system.

M The M category represents the absence or presence of metastatic disease. M0 means that the disease has not spread to distant organs and M1 signifies distant spread. 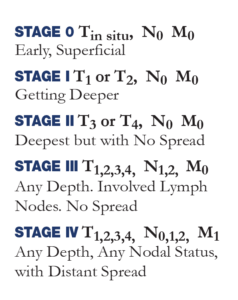 Once a tumor has been characterized by the TNM system, its place in the staging system follows, and treatment, based on scientific evidence, can be planned. Again, the following staging is somewhat simplified.

Stage 0 The tumor is at its earliest observable stage, has not breached the muscularis mucosa, and is superficial. Tis

Stage I represents a lesion which has grown through the muscularis mucosa, into the submucosa (T1), or into the muscularis propria (T2), has no involved lymph nodes and has no distant spread (N0 M0). Essentially, T1 or T2, N0 M0

Stage II is similar to stage I except that the tumor is thicker, and extends deeper, (T3 or T4). There is no nodal involvement or distant spread. Essentially, T3 or T4, N0 M0

Stage III represents a tumor of any thickness (any T depth), with 1 or more involved lymph nodes (N1 or N2) and has no distant spread (M0). Essentially any T, N1 or N2, M0

Stage IV This is the final and most advanced stage, and represents any tumor thickness, any nodal involvement (or no involvement) with distant spread. Essentially any T, any N, and M1

TREATMENT BY THE NUMBERS.

Let’s skip the history lesson about the evolution of colon and rectal cancer treatment and move directly to modern times. But first, recall, the treatment of rectal cancer is somewhat different than that for colon cancer. While the treatment of rectal cancers may involve radiation therapy, the colon cannot be radiated without significant damage to adjacent bowel and structures. Neoadjuvanttherapy is the term used to denote the preoperative administration of a 6 weeks course of radiation and chemotherapy. The chemotherapy is thought to sensitize cells to the destructive effects of radiation.

IF YOU ARE STUDYING FOR THE BOARD EXAMS, READ WHAT FOLLOWS!

Here are the advantages of neoadjuvant therapy: (1.) Possible complete eradication of the tumor in up to 15 to 20% of cases. (Studies are ongoing to identify which patients can avoid any surgery if they have a complete resolution of the tumor after neoadjuvant therapy). (2.) With tumor shrinkage, there is an increase in our ability to perform sphincter-sparing low anterior or ultra-low anterior resections (increased sphincter preservation rate). (3.) While the absolute survival time is not increased, there is a decrease in local recurrences to less than 6% (from 13% in the past). (4.) There is less chemotherapy toxicity. (5.) There is an increase in negative resection margins (no tumor at the distal resection line or radial margin). (6.) There is an increase in patient compliance with neoadjuvant regimen compared with the postoperative adjuvant chemotherapy. (7.) Studies are ongoing and are evaluating the effects of neoadjuvant chemoradiation in increasing the overall survival rate.

IF YOU ARE STUDYING FOR THE BOARD EXAMS MEMORIZE THIS TREATMENT SCHEME!

Stage 0 Remove the tumor operatively (either resect or locally excise).

Stage I Remove the tumor operatively. A temporary ostomy may be required.

Stage II Neoadjuvant therapy may be given over 6 weeks, followed by a 6 to 12 week rest period, followed by an operative resection. The decision to treat stage II rectal cancer with neoadjuvant therapy depends on several factors and is individualized for each patient. An ostomy may be required when performing an anastomosis in an irradiated field. Evaluate for complete clinical response, close follow up, and no further treatment unless the final clinical stage includes previously unsuspected lymph node involvement or distant spread.

Stage III Neoadjuvant therapy followed by a 6 to 12 week rest period, followed by an operative resection. An ostomy may be required when performing an anastomosis in an irradiated field. Evaluate for complete clinical response, close follow up, followed by additional chemotherapy.

Stage IV Treatment depends on the site of spread, the types of adjuvant therapies and coordination between the oncologist, the radiation therapist, the surgeon and the patient (and family). Coordinated liver or lung resections may be an option and may improve the chance for cure or control of disease.

We have entered a time when randomized, controlled trials have demonstrated repeatedly that the treatment of most colon and rectal cancers can be standardized and approached in a rational way. However, much misinformation remains at many levels. While the internet has many articles of high quality, people love to blog and tell anecdotal stories of various supposed cures. Often these accounts begin with “My first surgeon wanted to give me poisonous treatment and then perform major surgery. But I went to another doctor (or cancer center) and the doctor told me that I didn’t need all of that and…” (you know the rest).

Each patient and each treatment plan must be individualized, and the current standardized treatment plan can be modified and tailored to each patient scenario. But using current, proven regimens is a starting point in the rational treatment of rectal cancer.

Get informed. Get up to speed on the data. Find reputable physicians versed in current therapy. Get treated and get it out! The life you save may be your own.