The abscess… a fistula in the making. 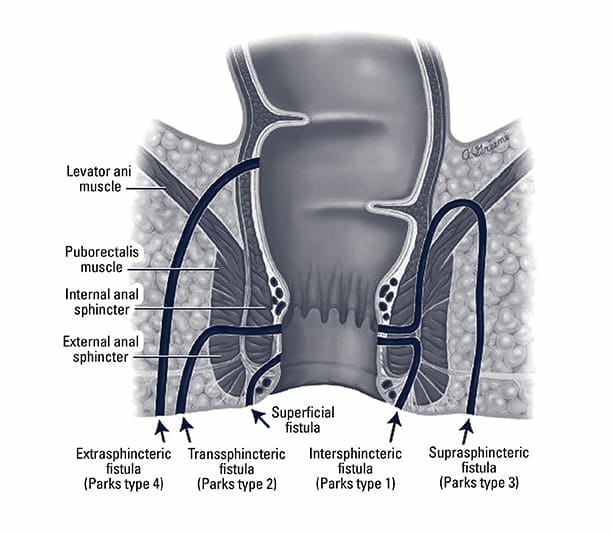 As the purulent material burrows outward from the anorectal canal, the resulting closed-space inflammation may become purulent and fluctuant. It may be seen as an area of erythema in the perianal skin. Often, the abscess presents as a painful fluctuant mass. This situation is worsened in immunocompromised patients and in those patients with diabetes mellitus. Rarely, the abscess may become life threatening and may spread throughout the perineum, resulting in systemic sepsis.

A fully developed abscess may spontaneously rupture externally or may require surgical incision and drainage. Either way, the patient experiences relief of pain following the rupture or drainage. Often, the abscess cavity heals and closes without further sequelae. However, in fifty percent of patients a residual connection remains, resulting in a perianal or perirectal fistula.

FIRST AN ABCESSS. THEN, THE FISTULA.

Fistula is the Latin word for reed or pipe. In the clinical setting a fistula is a chronic granulating tract connecting two epithelial-lined surfaces; in this case the fistulous connection occurs between the anorectum and the skin of the buttocks. Most commonly caused by a previous anorectal bacterial abscess, other less frequent causes include inflammatory bowel disease (Crohn’s Disease or ulcerative colitis), Actinomycosis or Lymphogranuloma venereum. For unknown reasons, this disease process occurs twice as frequently in men compared with the rate in women.

Most often, a patient will give a history of having experienced an abscess which ruptured spontaneously or was drained surgically. Subsequent to this, there may be a continuous or intermittent drainage of purulent material. The condition is usually painless but may be associated with pain when the purulent material ceases to drain and then builds up. Perianal pruritus or soreness are common coexisting symptoms.

Diagnosis may be made through visual inspection by an experienced observer, palpation, passage of a probe into the external opening, by proctosigmoidoscopy, or through the passage of a radio-opaque liquid into the fistula while observing the flow with fluoroscopy.

THE FISTULA CAN RESOLVE SPONTANEOUSLY…OR NOT.

Rarely, the fistula may close spontaneously. Most often, a chronic fistula will require some form of surgical treatment to effect healing. Most commonly, a fistulotomy is necessary in order to cure the fistula. Usually, the fistulous tract is opened surgically and allowed to granulate and resolve. Recurrences are not uncommon, and the treatment is usually curative.

THE FISTULA DID NOT RESOLVE. NOW WHAT?

A COMPLICATED FISTULA. SEND IN THE SPECIALIST.

A Flap? An older, commonly used technique to repair a fistula is the advancement flap. In this technique, a flap of normal rectal mucosa is used to simply cover the internal opening. While elegant in theory, these flaps can fail, leaving the patient no better off than before the operation.

Glue? Fibrin sealant involves injecting the fistula tract with a mixture of fibrinogen, thrombin, and calcium ions through a catheter which is advanced into the fistula tract up to the internal opening. Up to 5 cc’s of the glue is injected, potentially sealing off the tract. Fibrin glue is used to treat complex fistulas as a way to avoid extensive surgery. However, long-term healing of the fistula tract has been disappointing with success rates ranging from 14 – 69%. Extravasation of the sealant and failure of the tissues to incorporate the glue are the most likely cause of failure.

A Plug? Two types of fistula plugs have been developed: a collagen plug made of lyophilized decellularized porcine small intestinal submucosa was developed first, followed by the development of another completely synthetic fistula plug introduced in 2009. Results of the collagen plug were disappointing due to plug extrusion, with failure rates up to 71% in some studies. Attempts were made to prevent extrusion including suturing the plug to the fistula’s internal opening but not only did this not always prevent extrusion, but patients also found it uncomfortable. The completely synthetic fistula plug, which is a matrix of polymers polyglycolic acid/trimethylene carbonate (PGA/TMC), acts as a scaffolding for tissue ingrowth to promote healing. The plug consists of a disc sutured to the internal opening with 6 legs attached which are pulled through the fistula tract.