When To Call The Surgeon

Diverticula are small areas of mucosal herniation through the colonic wall. They are pulsion diverticula or pseudodiverticula containing only the mucosal layer of the colon.  They typically occur in the left colon and sigmoid colon.  As increases in intraluminal pressure and segmentation occur, especially in those patients with constipation, there is a tendency for the mucosa to herniate through weak areas near the tinea where nutrient blood vessels penetrate the colonic wall. 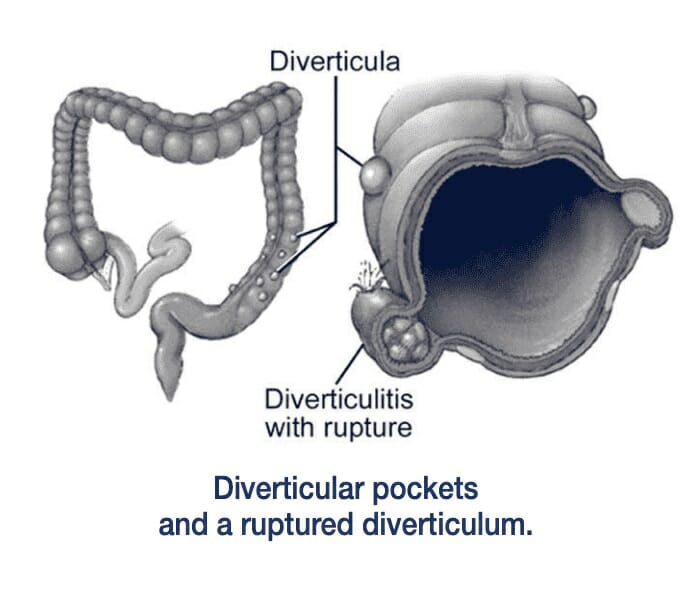 In the western civilization, thirty per cent of the adult population will develop diverticulosis by the age of sixty, and the prevalence of diverticulosis in the over eighty age group approaches sixty per cent.  These findings seem to be related to a decrease in consumption of dietary fiber, as milling removes much of the fiber content of flour in our refined foods.

In the majority of cases, diverticula remain asymptomatic.  However some individuals may develop symptoms requiring medical evaluation.  When does this medical condition require surgical intervention?

Diverticular Bleeding…Time To Call The Surgeon?

Since diverticula develop adjacent to areas of penetrating blood vessels, a blood vessel can rupture into the colonic lumen and result in severe,  occasionally life threatening, colonic bleeding.   Fortunately, the majority of diverticular bleeding is self-limited and requires no surgical intervention.  As diverticula can be found throughout the colon, further investigation of severe bleeding is often carried out to elucidate the exact site of the bleeding.  Diagnostic tests may include technetium tagged red blood cell scans, colonoscopy, and/or visceral angiography.  The technetium tagged red blood cell scan, which can detect bleeding rates as low as 0.1 cc per minute,  is used solely to identify active, ongoing bleeding. It is highly unreliable in locating the exact site of the blood loss.  If the bleeding can be localized during colonoscopy, local measures such as vessel clipping or epinepherine injection may be able to stop the bleeding.  However, this may be exceedingly difficult to perform in the unprepared colon containing a large volume of blood and clot.  Visceral angiography, which can detect bleeding at a rate of 0.5 cc per minute, may be both diagnostic and therapeutic.  If a bleeding vessel is identified, local instillation of vasoconstrictive agents such as vasopressin may stop the bleeding.  However, rebleeding is common once the agent is stopped.  Highly selective visceral angiography with embolization can also be performed in order to stop the bleeding.  This carries a high success rate with trained angiographers, but can carry a ten per cent risk of colonic ischemia or necrosis.

If  bleeding can be localized but not stopped, than a selective colon resection should be performed.  More frequently, however, the exact point of bleeding in the colon is never identified.  If the patient has required more than six units of blood in 24 hours, has persistent bleeding or is medically unstable, an emergency total abdominal colectomy and primary ileo-rectal anastomosis is indicated.    Stoma formation is typically not required in the management of bleeding diverticulosis.

Diverticulitis results from a microperforation of a diverticulum and most commonly occurs in the sigmoid colon.   Increased intraluminal pressure or local trauma due to inspissated stool leads to erosion of the diverticulum.  This may cause inflammation and necrosis of the diverticular mucosa, resulting in perforation.  Typically, the microperforation is rapidly walled off by the pericolic fat or is contained within the colonic mesentery.  More significant perforation, or perforation not adequately contained may result in free, intraabdominal perforation and diffuse peritonitis.  The ingestion of seeds or nuts does not lead to the development of diverticular inflammation.

Seventy five per cent of initial episodes of diverticulitis are uncomplicated, presenting with the triad of left lower quadrant tenderness, fever and leukocytosis.  CT scanning is the preferred confirmatory diagnostic test and can identify free air, phlegmon, abscess or the presence of fistulae.  Eighty five per cent of patients will respond to medical therapy with intravenous hydration, intravenous antibiotics and bowel rest.  A subset of patients with minimal pain and no systemic signs of sepsis may be treated on an outpatient basis with oral antibiotics and a clear liquid diet.   All patients should have a colonoscopy or a contrast enema study performed 6 weeks following resolution of symptoms to rule out other pathology.  Colonic obstruction and gastrointesitnal bleeding are exceedingly rare findings and other pathology such as cancer, colonic ischemia or inflammatory bowel disease must be considered.

Diverticular Complications…Time To Call The Surgeon!

With each recurrence, response rate to medical therapy decreases, with only six per cent of patients responding to medical therapy after the third episode.  After a second episode, most patients will develop persistent symptoms and fifty per cent can experience complications.  Therefore, in patients with more than two documented episodes of uncomplicated diverticulitis, elective sigmoid resection should be considered.  Operative treatment can usually be performed laparoscopically, a with low morbidity and mortality rate, less postoperative discomfort and a quicker return to the activities of daily living.  While the distal margin of resection is always at the top of rectum where no diverticula form, the proximal margin need only include the area of thickened colon, even in the presence of pandiverticulosis.   Stoma formation in the elective setting not usually necessary.  The recurrence rate of diverticulitis following such adequate resection is only two per cent

A subset of patients is recommended to undergo elective resection after only a single episode of uncomplicated diverticulitis.  This includes immunocompromised patients, patients with connective tissue disorders, and individuals under the age of forty.  Elective resection in patients under the age of forty is controversial.  These patients are most commonly obese males.   It is thought that younger patients manifest a more virulent form of the disease, experience more frequent recurrences and are more likely to suffer complications following the first episode.  The risks and benefits of the surgical approach versus non-operative management must be clearly discussed with each patient.

Management of complicated diverticulitis, with free perforation, with a large abscess or with fistula formation can be more challenging.  Free perforation with diffuse peritonitis requires emergent resection with formation of a temporary colostomy (a Hartman’s procedure).   The colostomy is typically reversed in three months.  However, because of co-morbidities, one third of patients may not have the stoma closed.  In rare situations in which there is minimal intraabdominal contamination, resection and primary anastomosis may be considered.

With the initial presence of an abscess larger than two cm., or with the development of an abscess in stable patients not responding to medical therapy, CT guided drainage should be attempted.  This will frequently lead to resolution of symptoms without a need for acute surgical intervention.  However, without resolution, operative intervention must be undertaken and consists of  a segmental colonic resection, with or without a proximal ostomy.

Patients experiencing complications of diverticulitis may occasionally be managed nonoperatively.  However, they should undergo curative elective surgical intervention following resolution of the inflammatory reaction.  Without appropriate operative treatment, there is a high risk of recurrence and long-term symptoms.

The presence of a colovesicle or colovaginal fistula does not require immediate operation.  Most patients with these complications elect to have an elective repair because of the debilitating nature of these sequelae.

Twenty Five Grams Of Fiber A Day May Keep The Surgeon At Bay.

Fiber increases the wet weight of stool, increases stool caliber, improves colon transit time and decreases segmentation and intraluminal pressure exerted on the colon wall.   Twenty five to thirty grams of dietary fiber are required daily for optimal colonic function and may minimize the potential adverse sequelae of diverticulosis.  There is no direct link between the ingestion of seeds, nuts or popcorn and the development of diverticula or the complications associated with diverticulosis or diverticulitis.  As long as an adequate fiber intake is maintained, no other dietary restrictions are necessary.