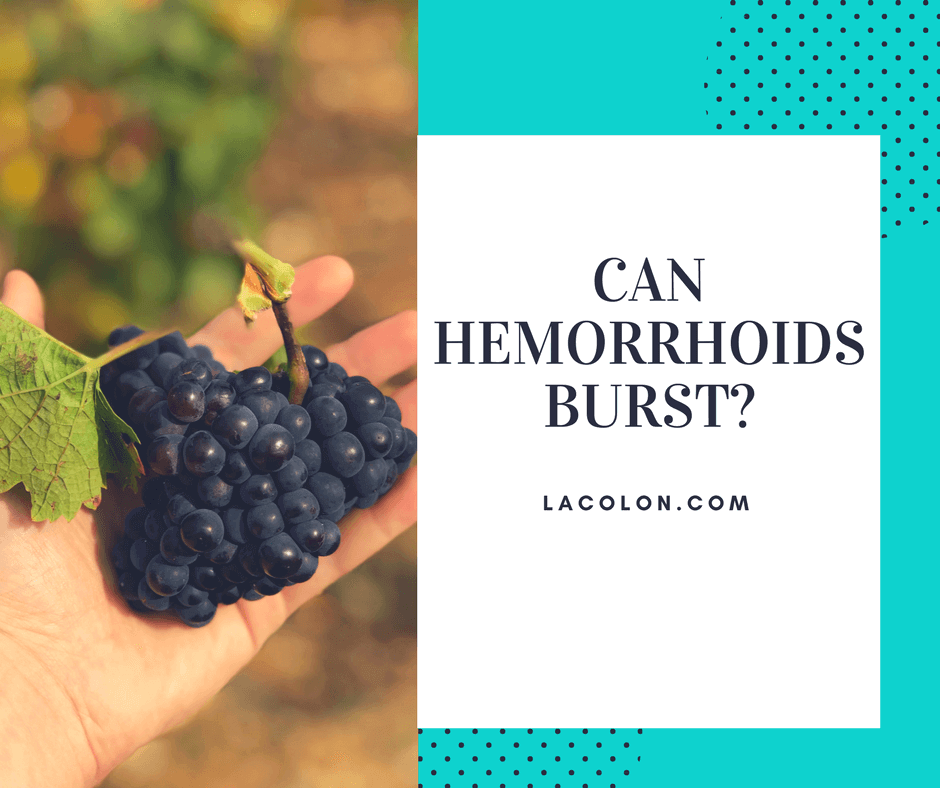 Hemorrhoidal tissue is a normal part of everyone’s anatomy; everyone has these veins. In some people, though, they become enlarged. This leads to pain, irritation and sometimes bleeding. Reports indicate that about 40 percent of adults in the United States suffer from this condition.

The condition commonly called hemorrhoids is caused by swollen veins near the anus. The swelling occurs when the vein walls are weakened and irritated. This can happen externally, where it often leads to a painful marble-sized mass. It also happens internally, where there may be few symptoms prior to bursting. While hemorrhoids can cause problems for anyone, they are most common in those between the ages of 45 and 65. They also occur in Caucasians more often than African Americans.

Both internal and external hemorrhoids can rupture and bleed. This occurs when the weakened walls of the veins develop a tear. Many of the things that put strain on the hemorrhoidal veins and cause the condition to develop in the first place can also cause them to burst. These can include:

How Will I Know If My Hemorrhoids Burst?

The symptoms most people associate with problematic hemorrhoids are usually more indicative of external issues. This most often includes burning pain and intense itching near the anus. It is incredibly distracting, as well as annoying and painful. When these symptoms occur, people often assume it is hemorrhoidal in nature, and seek over-the-counter treatment before the veins burst. If a rupture does occur, bright red blood may be seen.

Internal swollen hemorrhoids are often much easier to overlook. Because there are fewer nerve endings inside the rectum, the pain and itching are sometimes absent. While internal hemorrhoids may be pushed out the anus, known as protrusion or prolapse, this is rare. Instead, the first symptom of an internal hemorrhoid is often the rectal bleeding that occurs during rupture. In many cases, this occurs during a normal bowel movement.

Should I See A Doctor For A Burst Hemorrhoid?

Even if you are fairly certain that your rectal bleeding is caused by a burst hemorrhoid, it is important to visit a doctor to be sure. This is because about 40 percent of people who visit a doctor for hemorrhoid issues are actually diagnosed with other problems that must be addressed.

Your general practitioner or proctologist will ask about your symptoms and lifestyle, as well as conduct a physical examination. While some patients require further testing, in most people this is enough to confirm a diagnosis. This examination is especially important in ruling out other possible causes, including more serious diseases of the digestive tract.

How Will My Doctor Treat Hemorrhoids?

Even if you don’t see a doctor, the pain and irritation associated with swollen hemorrhoids will resolve within a few weeks. Since it is important to ensure a correct diagnosis, however, your doctor will also be able to help you find treatments that will offer short-term relief and speed the healing process.

Before determining the best treatment, the doctor will examine the hemorrhoid, and determine if the vein has already burst. If not, he may drain the blood by excising it under local anesthetic. Your doctor will probably also offer a number of treatments to continue at home. These often include:

In other cases, more invasive treatments may be necessary. There are a number of ways to shrink or remove swollen hemorrhoids. All of them are effective, although some may require a longer recovery time and others may have a lower risk of recurrence. The key to which procedure will best fit your needs will most likely be made by your doctor, and may simply be the technique he is most comfortable performing. They include:

What Happens After Treatment?

Once a burst hemorrhoid has healed, there is very little follow-up treatment necessary. Your doctor may recommend weight loss, lifestyle and dietary changes and other measures to reduce your risk of further issues.

If you have been seeing your regular doctor for treatment, he will most likely recommend you see a colon and rectal surgical specialist, who may recommend further treatments to reduce the chances of recurrence. Invasive surgery is rarely needed, however, and chronic hemorrhoids are rarely a problem for an extended period of time.

The board certified surgeons of Los Angeles Colon and Rectal Surgical Associates treat burst hemorrhoids, as well as patients with chronic or recurring issues. They are specialists in all diseases of the colon, rectum and anus. By calling (310) 273-2310, you can schedule a confidential appointment and discuss any of you questions with your physician.